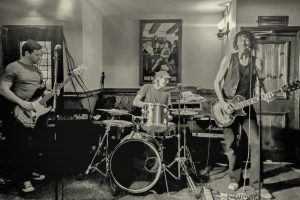 EP ‘Out of Time’ is available on Bandcamp and a physical release will be out soon.

Hooby and the Yabbit also play originals and re-workings of classics by Led Zep, The Band, The Eagles, Delbert McClinton, and Chuck Berry.

Formed in 2016 by singer/songwriter Ian Hawkins, the band performed at Wakefield’s Beer Festival at Fernandez Bar, performed as an acoustic duo in The Beer Exchange Wakefield, and at The Harlequin, Sheffield during November 2016. Ian then performed a solo acoustic spot at Players Club, Wakefield on December 26th.

On the strength of this Hooby were invited to perform at Clarence Park Music festival on Saturday July 29th 2017, preceded by a Clarence launch night at the Wakefield Beer Exchange July 28th.

The bands first EP is due for release in the Autumn of 2018 and will feature three original compositions ‘Tea and Toast’, ‘Movie Town’ and ‘Handsome Curves’.

Performed and recorded with a variety of artistes on bass and drums including top tribute bands Limehouse Lizzy, Off The Wall (International Pink Floyd tribute performing all round the world), The B-Eagles, dance Hip-Hop band The Bluefoot Project (album ‘Brave’ release on Chocolate Fireguard records 2003, performing at Glastonberry and many other UK festivals), Acoustic rocker Jon Strong, and New York hard rocker Adam Bomb (performing throughout UK & Europe)

Ian is now band leader and song writer for Hooby and the Yabbit and also performs solo acoustic gigs.